CHIEF OF DEFENCE STAFF – NEED FOR AN EMPOWERED  GAME CHANGER

In the midst of immense speculation and anticipation, what stands out is the fact that India will soon have a CDS.  Irrespective of the personality, CDS’s mandate, authority and support structure will determine the effectiveness with which the institution delivers towards India’s defence preparedness – Editor

The announcement by PM Modi that India will soon have a Chief of Defence Staff (CDS) is indeed welcome. The statement of the PM “To further sharpen coordination between the forces, I want to announce a major decision. India will have a Chief of Defence Staff. This is going to make the forces even more effective,” was indicative of the focus and intent as regards future defence capability. The statement needs to be optimistically seen in the larger canvas of transformation of Higher Defence Organisation, aimed at making the Defence Forces a future-ready integrated whole. The proposal has been on debate for a long time but has been persistently put in the cold storage due to various reasons including inter service turf issues and bureaucratic and political apprehensions. Some of these apprehensions are amply clear from the CCS note that sanctioned HQ IDS saying “as and when the CDS is established, he will have equal voting rights as the service chiefs, and where two service chiefs don’t agree, the MoD will arbitrate”.

National security cannot be compromised in light of ever evolving threats, desired capabilities and our aspirations of becoming a future net security provider as a major regional power. The credibility of CDS will however depend on empowerment and the role he plays for sound military-strategic advice and tri-service synergy.

The Logic, Apprehensions and Sensibilities of CDS

There are three key elements that ail our defence preparedness. Firstly, lack of mixed integrated manning within MoD and suboptimal inter service synergy.   Secondly, lacklustre defence procurement processes, a frail defence industrial base and lack of an integrated approach.  And lastly, but most importantly, elusive budgetary support and even within the allocated resources failing to prioritise inter-service projections.  An empowered CDS as a single point military advisor to the Defence Ministers, could positively contribute to address all these challenges more coherently. He should have authority over the three chiefs, but the chiefs be over all responsible for the functioning of their specific service.

USA has  a Chairman of the Joint Chiefs of Staff (CJCS)  who by US law, is the highest-ranking and senior-most military officer in the United States Armed Forces and is the principal military advisor to the President, the National Security Council, the Homeland Security Council, and the Secretary of Defence. While the Chairman of the Joint Chiefs of Staff outranks all other commissioned officers, the Chairman does not enjoy any operational command authority over the armed forces.

In our context, presently the senior most chief (Army, Navy and Air force) is appointed as Chairman Chief of Staff Committee (Chairman COSC). The Defense Secretary acts as an interface between the armed forces and the political executive. The Armed Forces HQ are still considered as “Attached Offices” of the Ministry of Defence and it is the Defence Secretary who is responsible for the defence of the country.

The present  Chiefs of Staff Committee suffers from structural and functional deficiencies. This body has recommendatory and  not peremptory authority. Further its scope is restricted to only questions on an agreed agenda, thus treating certain critical but contentious issues in a dilatory manner.  The Chairman COSC, a rotational figurehead is only a first among the equals. He enjoys little power to settle inter service goal conflicts resulting in compromised and consensual decision making. Thus, the Chairman COSC, lacks authority, responsibility and accountability. The appointment of a CDS would ameliorate this situation by improving inter service coordination and where conflict of interest develops resolve it in the best interest of national security. Further the CDS as Principal military adviser to Defence Minister will allow the Chiefs to concentrate on operational and administrative issues. The present arrangement of the civilian bureaucracy exercising authority without expertise or responsibility has obvious drawbacks especially in the light of complexities of future warfare and multi spectrum threats.

The counter arguments by naysayers range from the CDS being warranted only for nations with global commitments, CDS will add another bureaucratic layer between Chiefs and civil leadership impeding decision making, the Chiefs authority will get diluted and CDS could precipitate inter service discord as his expertise is service specific and thus cannot enhance inter service coordination nor act in a technically sound manner. In addition, the CDS is expected to diminish the status of Defence Secretary and the IAS lobby in the MoD making the military all powerful. A recent tweet from @ IAS_Fraternity  (this is not the official  twitter handle of the IAS association but speaks of shaping policy formulation and implementation), saying “We don’t oppose creation of CDS post. But any attempt to degrade Defence Secretary or shift MoD civil services under CDS won’t be tolerated. We will protest such move and fight tooth and nail”, is indicative of these unfounded fears.

The fear that a CDS will erode the supremacy of the civil over the military is unfounded. The CDS will only be an Inter-Service professional coordinator with individual service chiefs having the right of direct access to the Head of the Government. Thus, having a CDS in the evolving geo strategic security environment, India’s expanded geographical security domain and future high technology multi domain wars, has become even more relevant. The proposition augurs well for strategising of a cost effective and robust national defence policy; synergised and calibrated tri-service contingency planning and capital acquisition plans within an affordable fiscal allocation.

Empowerment and Way Ahead

Role and Charter of Duties CDS. The CDS as the Principle Adviser to the Defence Minister must address tri service issues and all matters military. He should be responsible for coordinating functions of joint operational planning, employment, doctrines, training cum exercises, logistics, and capability building at the tri service level. The single service domain must be left to the service chiefs. He must prioritise and coordinate the LTIPP and synergise inter service defence procurements. He must exercise functional and administrative control over Joint Commands like Andaman and Nicobar Command, Defence Cyber Agency, Defence Space agency and Special Forces division. In addition, he must be a link in nuclear command chain and exercise administrative control over Strategic Forces Command. He should be responsible for preparing an annual operational readiness status report clearly identifying threats, capabilities, voids and mitigation recommendations to CCS. He must be an invitee to National Security Council and CCS meetings.

Review of AOB & TOB 1961. The archival Allocation and Transaction of Business rules (AoB and ToB 1961) need to be amended to reflect role and responsibilities of CDS and Service Chiefs as regards command function, defence of India and conduct of war. In addition, the Service HQ and IDS HQ presently designated as Integrated Headquarters must be given the status of Individual Departments under Vice Chiefs as the administrative Head, with matching administrative and financial powers. Allocation of business to these departments must be specified. The service chiefs must be above departments responsible for operational readiness of their respective service. The DoD under Defence Secretary as its administrative head should be responsible for inter department coordination and be the advisor to Defence Minister on policy, financial and administrative issues. Role and responsibility of each department including cross manning must be specified.

Restructuring of Higher Defence Management. This needs to evolve after due deliberation with all stake holders without diluting role, responsibility and authority. One basic model which could be further refined is as under: – 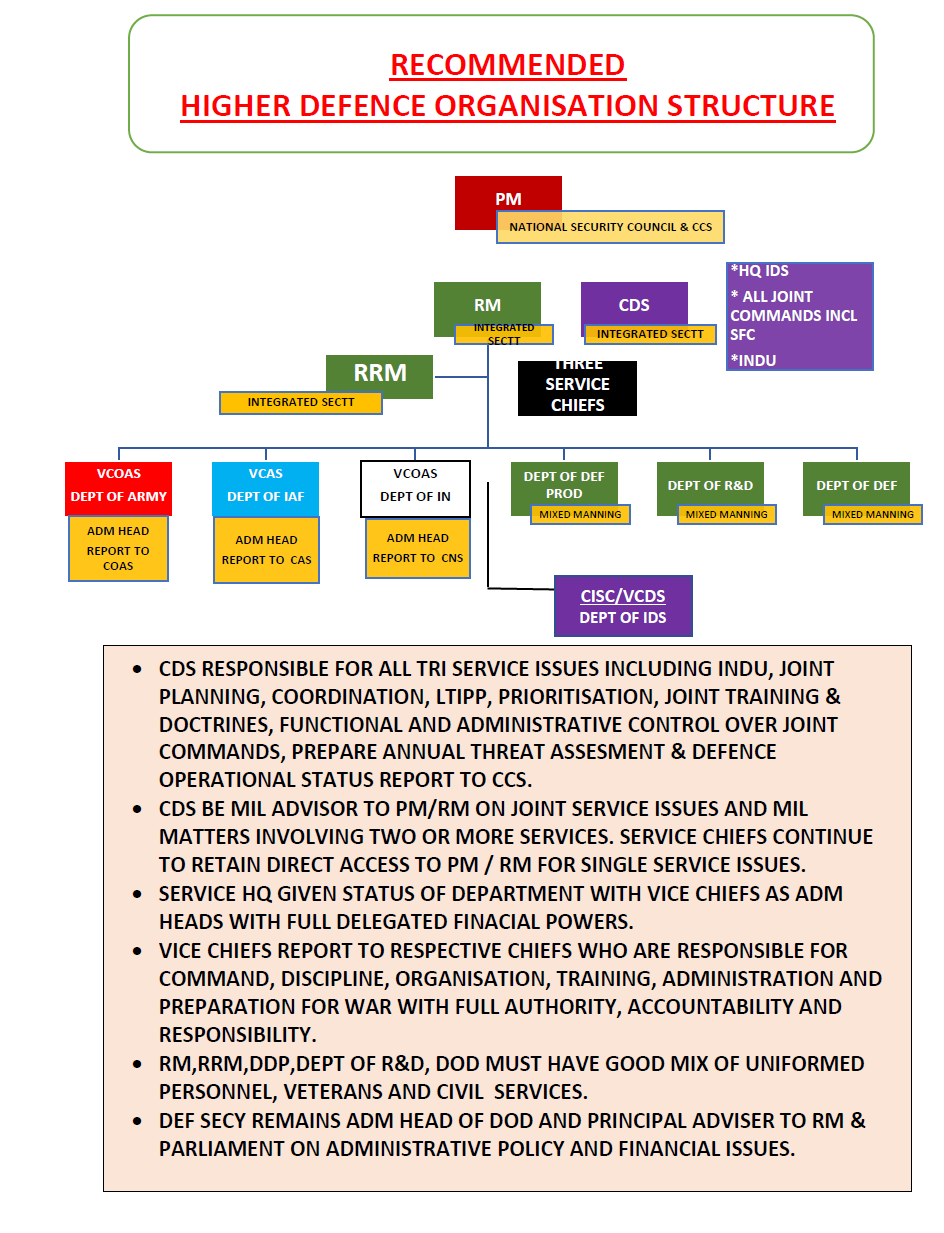 India’s military capability has evolved considerably over the ages but remains suboptimal to its true potential due to service specific silos and parochial bureaucratic control. Some joint structures like ANC, SFC, and now Defence Space and Defence Cyber Agencies and SF Division have been created to meet future warfare requirements. However, the higher defence organization structure has been conveniently stagnant for the fear of not stirring the proverbial “Hornets’ Nest”. It’s time to carry forward PM Modi’s bold decision of sanctioning a CDS to its logical end with clarity in of role, authority, responsibility and accountability. CDS should not end up being a symbolic and glorified appointment. In fact, putting the CDS in place must be complemented by amending the AoB/ToB and paving the way for Tri Service Integrated Theatre Commands. Thus, the landmark announcement of CDS needs matching status and empowerment so that he is able to walk the talk and the Nation wins.